Many residential outdoor audio systems rely on the age old 70 volt system developed for commercial sound systems with extremely long distances and wires between speakers. This is something you are likely to find in a shopping mall or amusement park. They find it necessary for several reasons. Since conventional electronics and amplification is always located indoors in the entertainment center for subwoofer satellite systems, at least three home runs consisting of 200′ or more of total cable are typically necessary just to get outside of the house. Then the same three cables must run to the speaker locations. Overall,several hundred feet of relatively small gauge wire is consumed in these system applications. In addition, the connections are the typical manual installed wire nuts, heat-shrink crimp connectors or other assorted connections that add their resistance and deterioration over time. To overcome these shortcomings, step-up transformers are inserted at the amplifier location and step-down transformers at the speakers. Unfortunately, these transformers compromise the sound since they have a negative effect on both the frequency response and efficiency of the system. Not to mention their significant added expense that does not contribute to the performance of the system,but rather deteriorates it. In many cases the step-up and down transformers cost more than half of the speaker drivers themselves and can reduce efficiency by two-thirds.

Transformers are key components in the speaker crossovers mentioned earlier, so they have limited capacity for passing wide frequency ranges and thus limit the frequency response of the systems they are connected to. Audio transformers vary greatly in performance. Efficiencies can range from 25-50% at best. Regardless, they are another component that is inserted in the signal path and they affect the sound based on their limitations and distortions. Last but not least, 70V is considered high voltage in most states, requiring installers to be licensed electrical contractors. How many electricians do you know who understand and have a passion for outdoor audio?

Southern Lights Outdoor Audio has spent an enormous amount of time researching and testing audio systems over the last few years and came to this conclusion; there is no better outdoor audio setup on the market. Due to the superiority of the patented Plug+Play Connector system, efficient transmission of sound and power is delivered to every component. Connections are made within minutes via IP-68 gold plated connections allowing simple daisy chaining of speakers along with speaker expansion cables that double the number of speakers that a system can safely and efficiently operate. In addition, outdoor amplifiers are designed and built to live and thrive outside so they can be located very near the speakers further reducing cable runs and quality -not to mention the cable and labor savings! 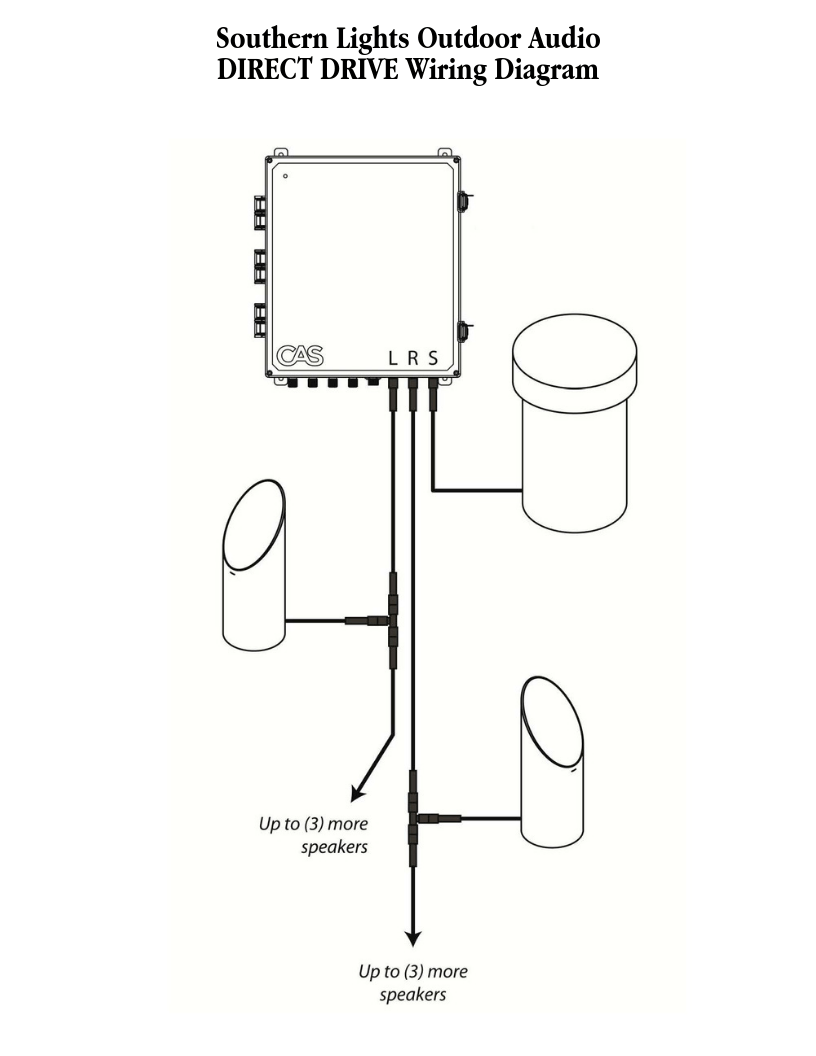